The Most Stressful Cities in America for Pets 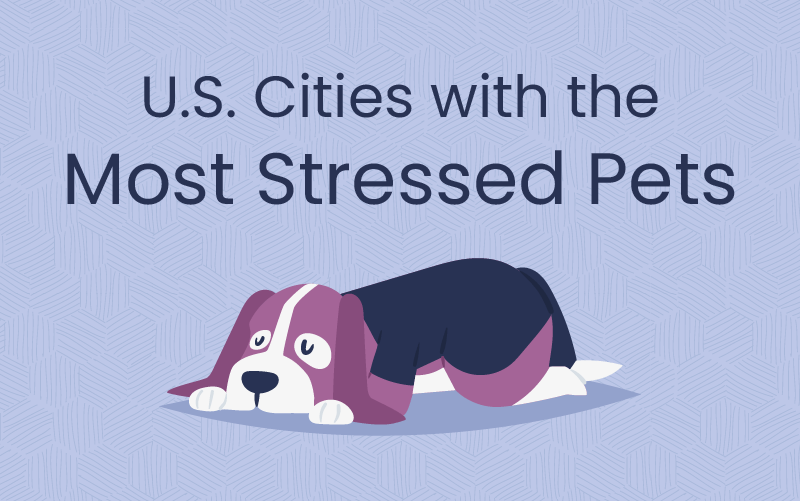 At Spruce, some of our favorite customers walk on four legs. We’ve talked to a lot of pet parents whose furry friends experience physical discomfort and mental stress. So, we know that for animals, uncontrollable factors like thunderstorms, noisy neighbors, and even crowded dog parks can be tremendous stressors.

As we continue to think about how to best support stressed pets and their owners, we’ve realized that, given the geographic nature of these stress factors, it might be a good idea to map out the U.S. cities with the most stressed pets. After all, some cities may get hit by many more thunderstorms while other cities may have frequent firework celebrations, creating entire clusters of stressed-out pets hiding under their owners’ couches.

We ranked major cities based on the frequency of seven common stressors for pets. The factors we decided to look at as indicators for stressed pets included stress-causing factors such as the number of days in the year with thunder, the percentage of residents who work away from home, the legality of fireworks, and the abundance of dog parks. However, rankings also took into account the presence of local stress-relieving factors, like the availability of parks and recreation land for exercise, and availability of dog trainers, as training your pet well can help with stress. 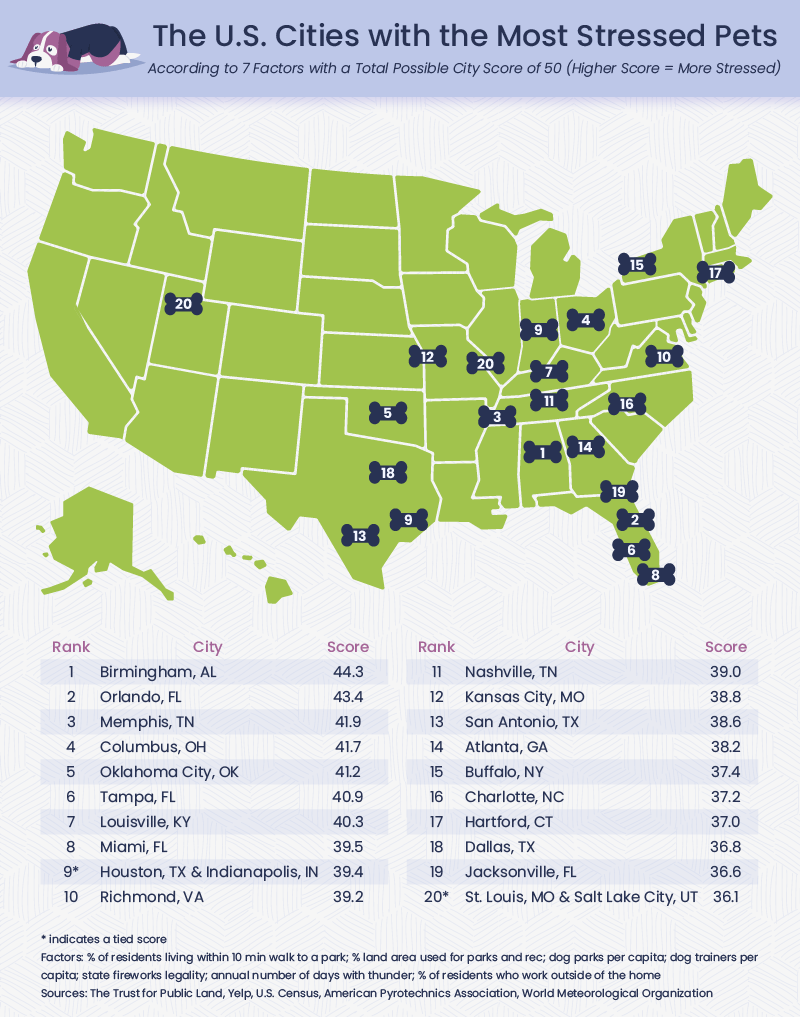 First, we looked at the cities with the most stressed pets.

Overall, the highest-ranking city was Birmingham, AL, scoring 44.3 out of a possible 50 points. Not surprisingly, Birmingham’s high rank was due to the combination of a high incidence of stress-causing factors, like days in the year with thunder and open laws around fireworks, and a low frequency of stress-relieving factors. For instance, Birmingham, a city with over 200,000 residents only had 4% of land set aside for parks and recreation use.

Interestingly, a CNBC report listed Birmingham as the third-most stressed city in the United States among human residents. Given that stressed people often seek to adopt or buy a pet as a way to channel those negative feelings, these trends show that maybe Birmingham leaders may want to rethink programs and city designs to aid in de-stressing people and dogs alike.

A major trend we saw among high-ranking cities was that many of them are located in the same region. Of the top 20 cities, twelve were located in the South, including Orlando, Memphis, and Louisville. Unquestionably, this region, famous for its hurricanes, garnered higher scores for frequent thunder. However, widespread city policies surrounding open use of fireworks (all these Southern cities designate fireworks as being “allowed or mostly allowed”), and little recreation use of city land suggests a trend in how city decision-makers create stressful conditions for pets.

The two states with the most cities in the top 20 for stressed pets were Florida and Texas, each with three cities. On top of the stressors pets in these states face, the heat indexes in parts of Florida and Texas present added discomfort and sometimes danger to pets, and must be considered as an important focus for owners, as recommended by The Humane Society. 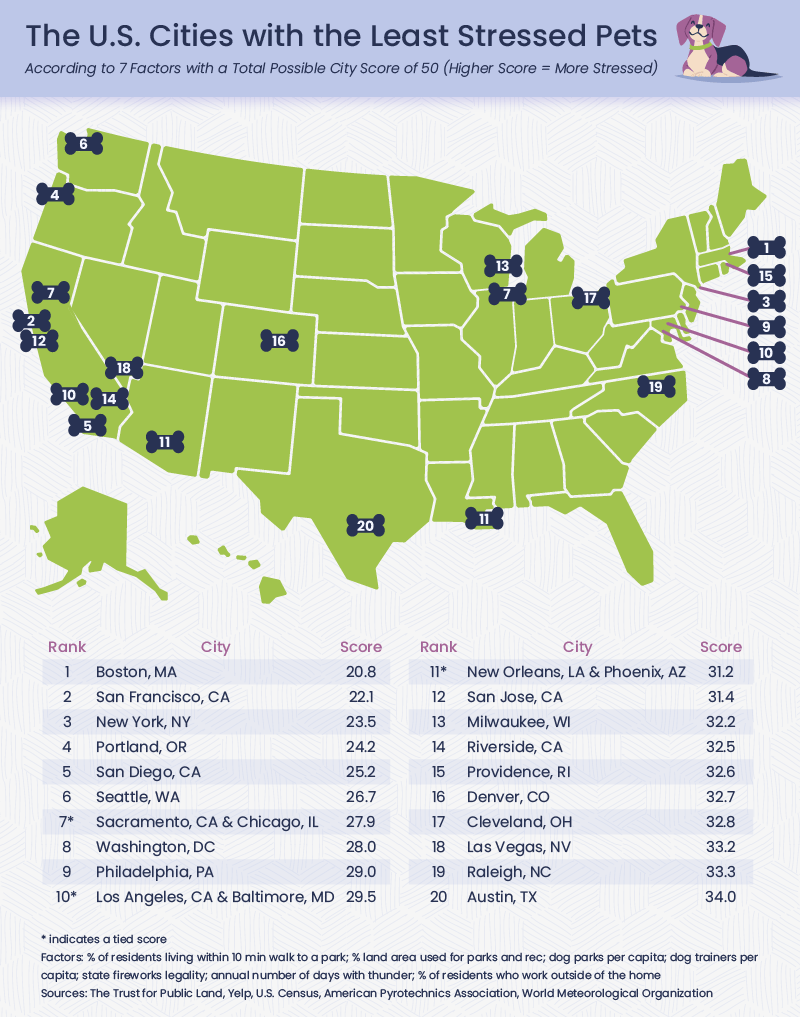 Of course, we couldn’t look at the cities with the most stressed pets without considering the cities that ranked lowest on the list.

The city with the least stressed pets was Boston, MA scoring only 20.8 out of 50 points. Nestled in a harbor that feeds into the Atlantic Ocean, Boston has plenty of beaches and public land set aside for pet-friendly parks, meaning that owners can take their pets out to unwind without running into hordes of other leashed-up animals. The city also has over 150 local dog trainers and is strict about its ban on fireworks. Plus, in a city where humans like to destress over drinks, there are plenty of dog-friendly restaurants and pubs where pets can relax with their owners.

While it may be surprising that a busy, major city like Boston ranked highly on the list, it was not the only metro hub to earn a low score for pet stressors. San Francisco, Los Angeles, and even New York all scored under 30 points for stress factors, ranking in the top 10 cities with the least stressed pets.  This all goes to show that residents of big cities can responsibly add pets to their lives without worrying about adding too much stress to the animals’ lives.

Overall, ranking the cities for the most- and least-stressed pets revealed some surprising general insights. First, Southern cities where pets may be expected to live care-free days in the sunshine actually have many stressed pets, due to uncontrollable factors like weather as well as city policies around land use and fireworks. On the other hand, major metropolitan cities across the country that we expected to be filled with highly stressed pets actually were home to the least stressed pets, due to the availability of stress-relieving factors like dog trainers, public land used for parks, and laws against fireworks.

Given these surprising insights, you may be reconsidering the stress which your pet carries. However, no matter where you live, keep an eye on your pet for signs of stress. After all, for all the support animals give their anxious owners, it’s important to return the favor.