Tuning in to Tune Out: Here Are America’s Favorite Trashy TV Shows For Self-Care 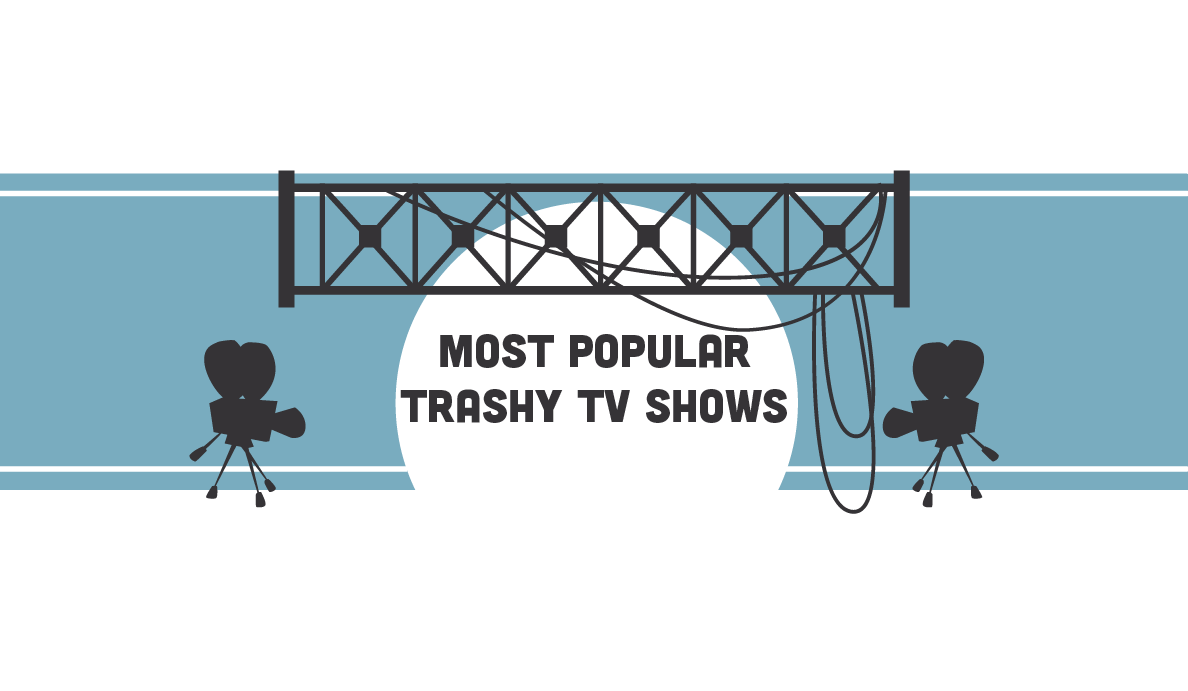 At TakeSpruce, we are all about giving your body what it needs to rest and rejuvenate. And sometimes, the perfect medicine after a long week is a couple of hours spent binging some amazingly terrible, trashy TV Shows. We may not like to fess up to our favorite shows during work meetings or with intellectual dates, but that doesn’t mean we aren’t dedicated to tuning into the trashy shows that are too bad to not be good.

Since conversations with friends who share the same low-brow taste sometimes end up in heated debates around which characters, stories, and premises are the wildest, we wanted to get a sense of national opinion around these trashy shows. Is everyone streaming the same trashy TV shows, or do regional and topical lines divide up the nation’s self-care watch lists?

To answer these questions, we looked at the Google Trends popularity data for 42 different trashy TV shows, from Dance Moms to Tiger King. We also took a special look at the Google Trends surrounding the most popular Real Housewives programs and personalities since we know that they have a special role in the world of trash TV. We then analyzed the trends based on state and region in order to get a better idea about how different Americans tune in to tune out. 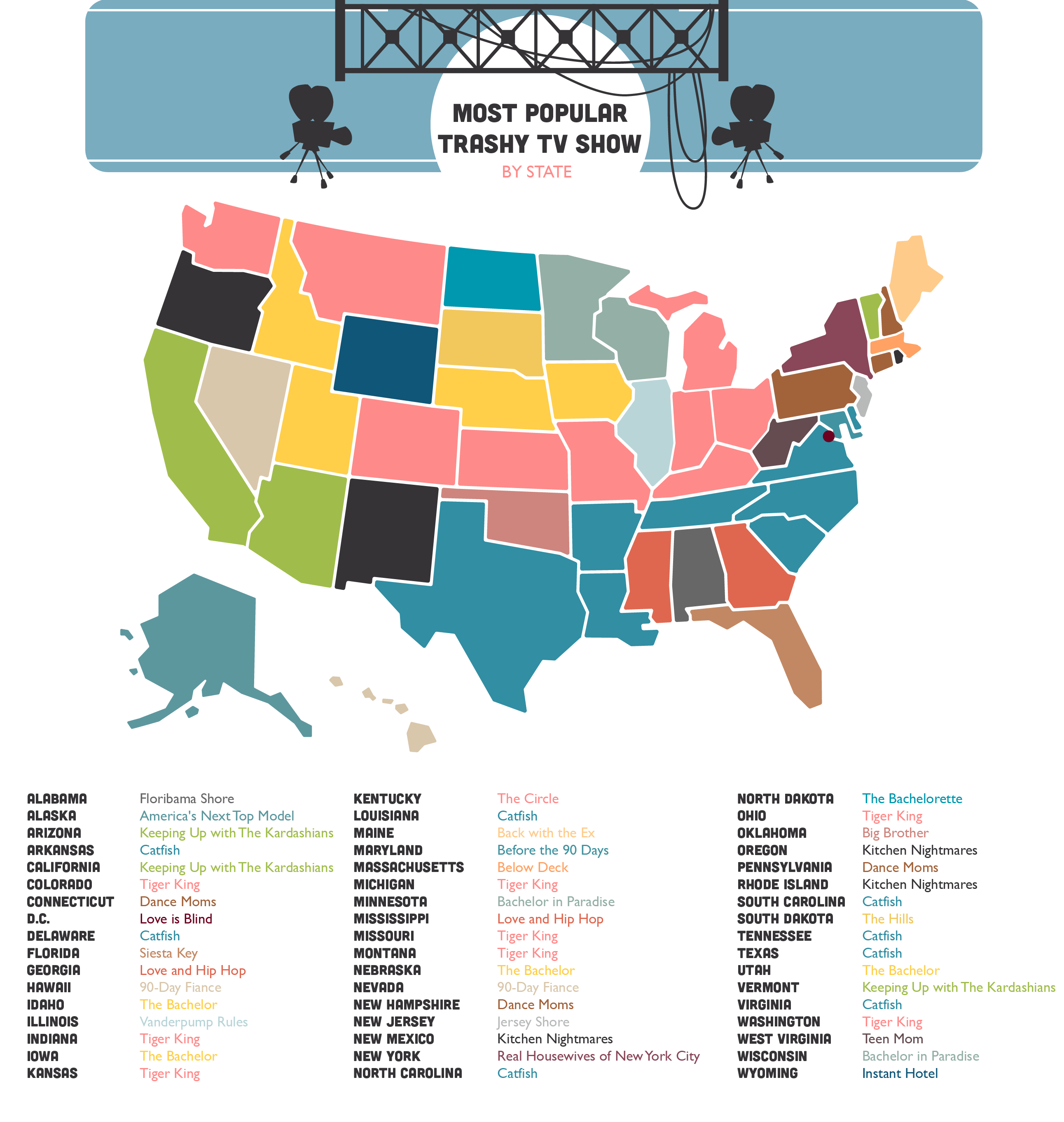 First, we gathered together all the popular shows from across the country. Interests ran the gamut, with neighboring states picking shows as wildly different as Love and Hip Hop in Mississippi to Catfish in Louisiana, showing that there really is a trashy show out there for all sorts of different states.

Notably, we saw that in certain states, trashy shows with a local flair were especially popular. For instance, Jersey Shore was the most popular show in New Jersey and Florabama Shore was especially popular in Alabama. Aside from hoping to spot local settings and personality types, this state-specific popularity might have to do with audiences having a special empathy for trashy, reality television participants, as was reported in an article from Business Insider analyzing the psychology of reality TV. 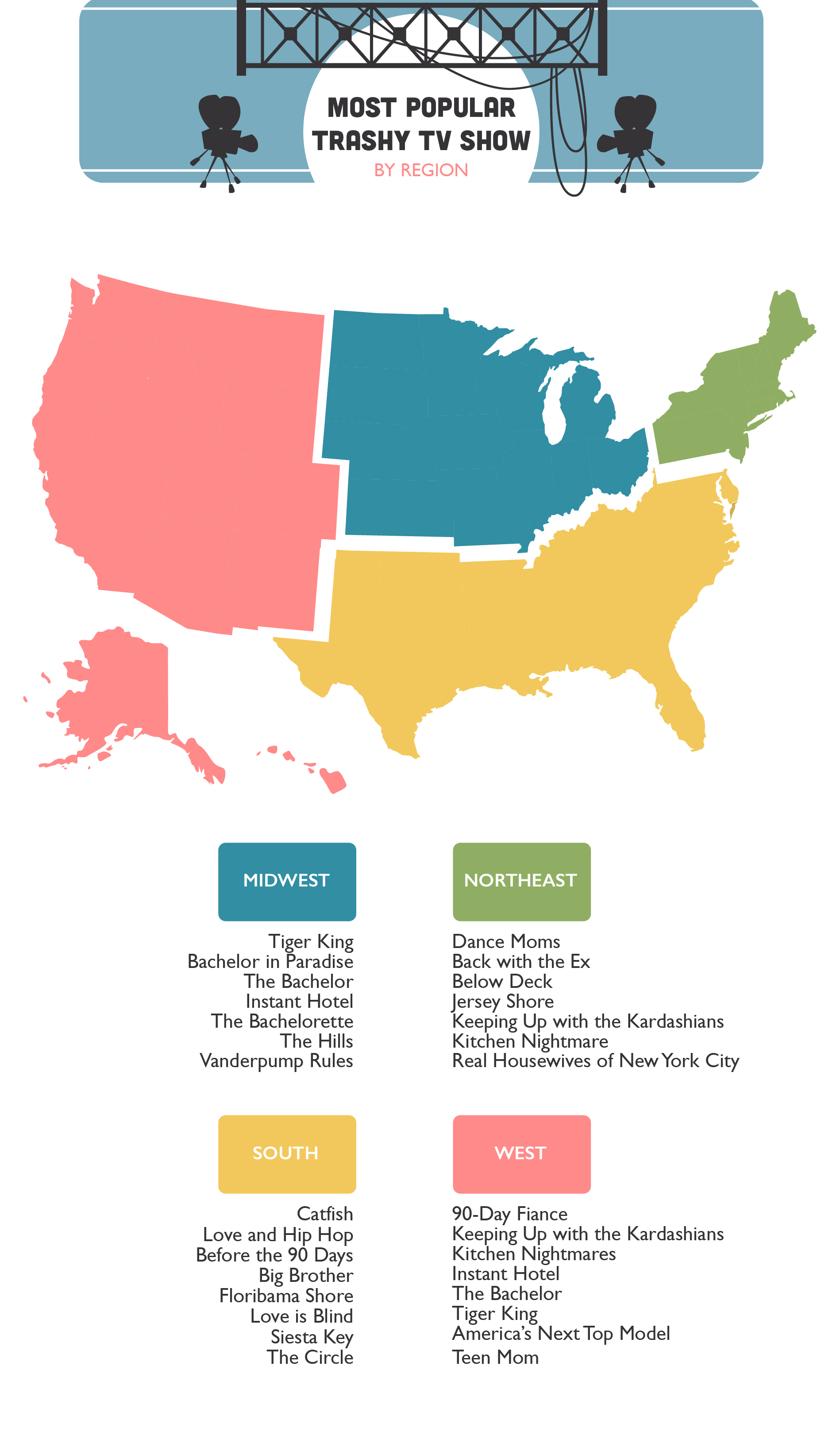 Since there was such a wide variety across different states for the popularity of shows, we wanted to look at regional trends as another point of analysis. Certain regions had some standout winners.

Most notably, in the South, Catfish was the most popular show in eight states, half of the number of states in the region. The show, which involves two documentarians helping track down elusive internet flirters, actually drew all of its popularity from southern states. Perhaps the perfect way to self-care in the southern humidity is to watch drama heat up between digital lovers.

Another notable show which led its region in popularity was Tiger King, the most popular show in six midwestern states. Tiger King’s wild characters and antagonistic relationship between Joe Exotic and Carole Baskins emblemized trashy TV’s ability to serve self-care during the stresses of the coronavirus pandemic, as reported in an article from Wired.com. Hopefully, Midwesterners binging the show were able to de-stress by reveling in the wild stories surrounding America’s big cats.

After looking at regional trends surrounding the most popular trashy TV shows, we wanted to look at the most popular shows in the country, to see what our nation collectively added to the queue while decompressing on the sofa.

After these two shows, the most popular trashy TV program was The Bachelor, the perfect fix for romance lovers and hard-hearted skeptics alike. The show, which was most popular in four states, draws criticism for everything from its lack of diversity to its fabricated love stories. But, no one can deny that its juicy romances make it perfect to binge with a pint of ice cream in hand. 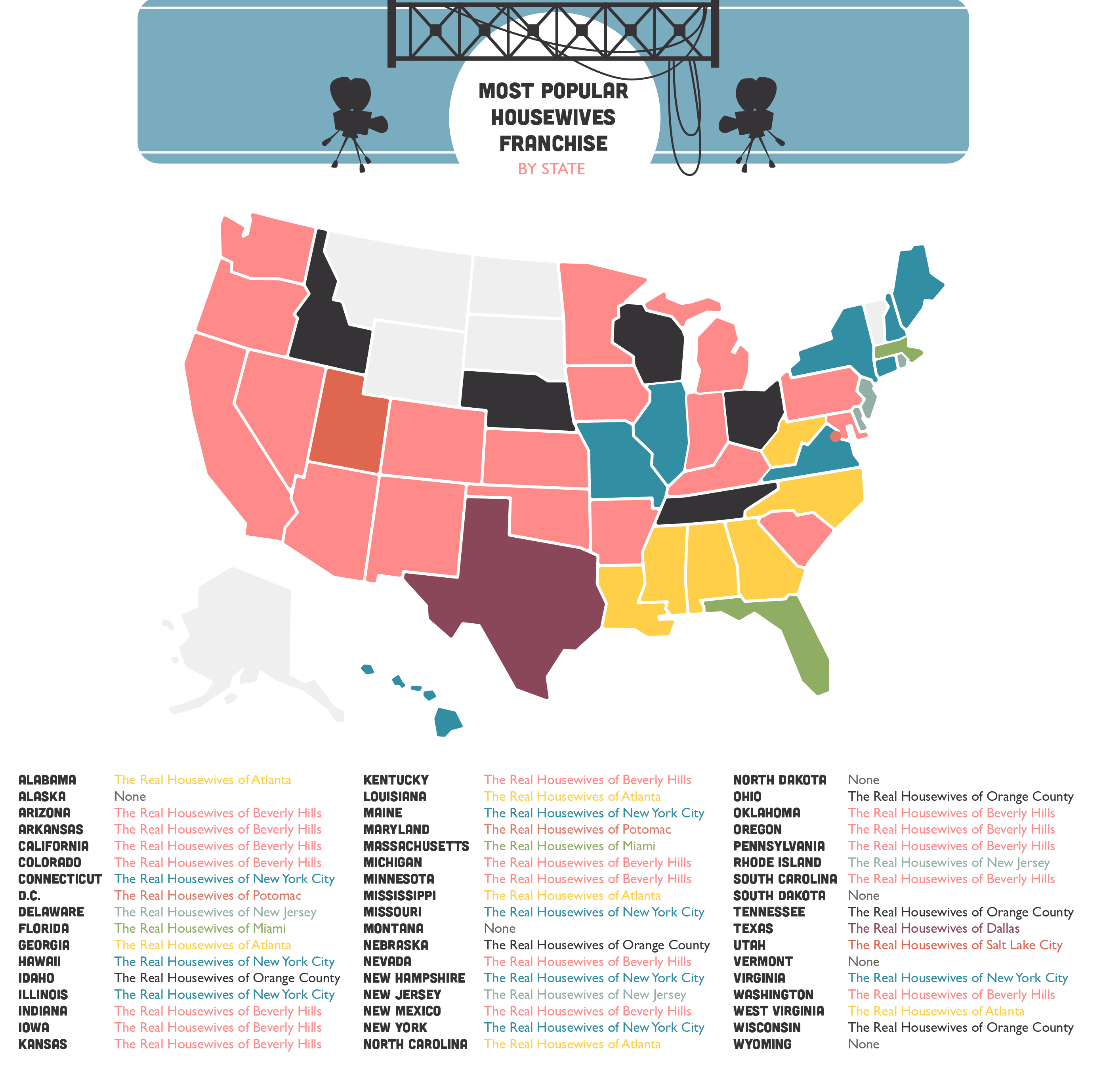 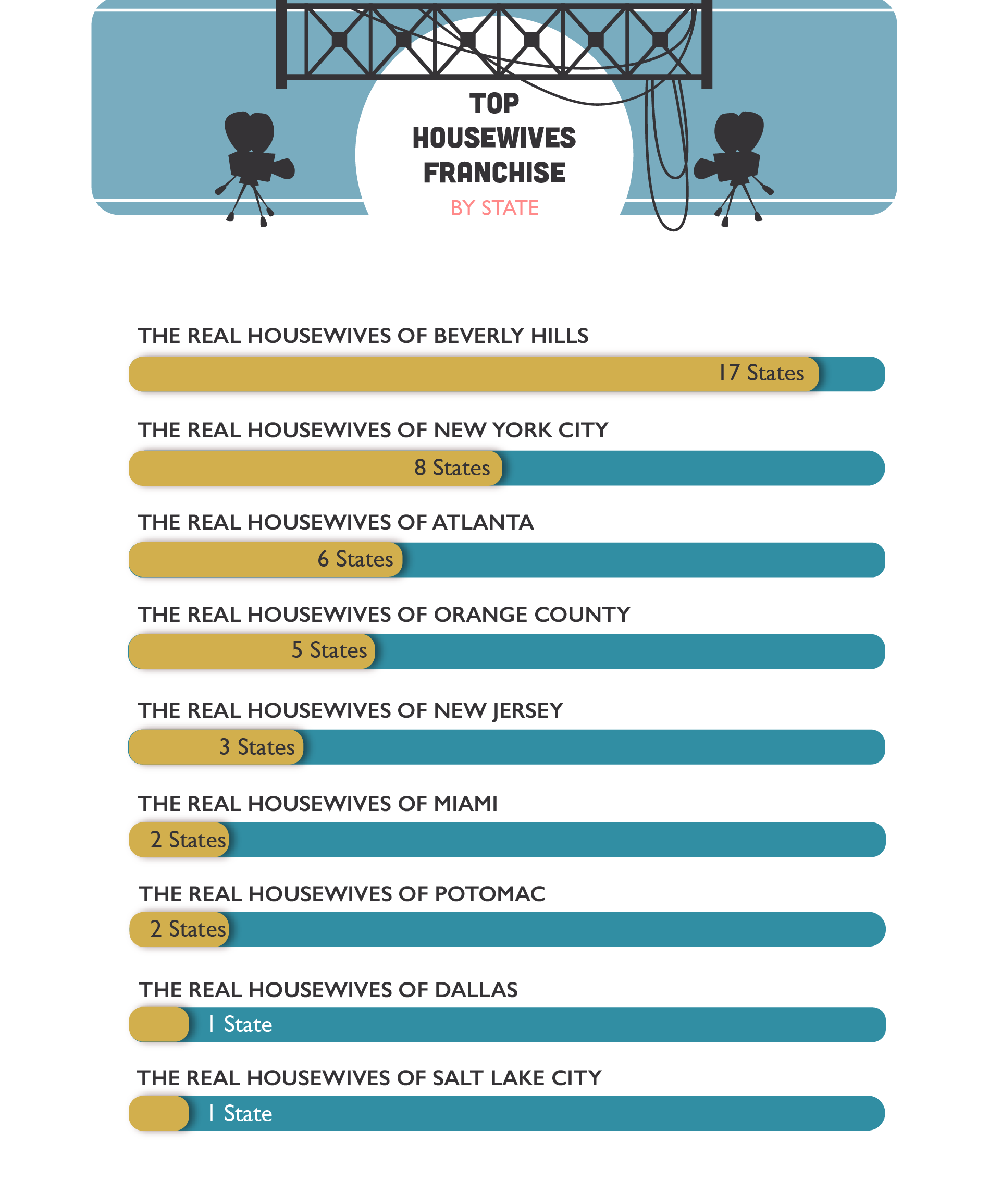 Finally, to pull it all together, we looked at the most popular Real Housewives series across the country. The clear winner was The Real Housewives of Beverly Hills, which follows the lives of the uber-rich in the country’s most exclusive zip code. While some may argue that the shouts of rich housewives may not be the most therapeutic trashy TV to watch, it can’t be denied that Americans love to watch them, as it was the most popular show in 17 states.

It’s interesting to see that for so many of us, our favorite trashy TV shows fall along with trends. From the data, we can see that the most popular trashy TV shows involve elements of romance or mysterious plots and that regional shows do especially well in places where audiences can follow the lives of their fellow state residents. And while we are sure that the psychological factors influencing our favorite trashy shows intertwine deeply with these popularity trends, the most important thing to know about these shows is that they will always be ready to stream when we need to unwind.