The Most Popular TikTok Dance Song in Every State

Love TikTok? You’re not alone. Across the world, app users are scrolling, recording, filtering, and, of course, dancing. In fact, in August 2020, TikTok reported having over 100 million users in the United States alone. That means, across the country, millions of Americans are twerking, hitting the “woah,” and “throwing it back”.

As a result, some users have risen to immediate internet fame, with TikTok dancer Charli D’Amelio raking in so many views on her caffeine-fueled dances that Dunkin’ Donuts decided to add “The Charli” to its drink menu nationwide. Other Gen Z TikTok influencers have joined forces, moving into L.A.-based TikTok houses to collaborate on creating viral content for the social media platform at scale.

Spruce is intrigued by the dynamic world of TikTok, and we love how the platform’s viral dances encourage users to connect online as well as get in some fun exercise in their own homes. Plus, we’re definitely guilty of trying to master a few dances ourselves. Still, there’s one thing that we can’t agree on: which TikTok dance song is the best?

To help us decide whether Savage, Renegade, or any other dance song ranks supreme, we turned to the TikTok-obsessed Americans googling dance challenges as we speak. We used Google Trends search volume data to analyze 35 different dances that have gone viral over the past 12 months to determine the most popular TikTok dance song in every state. Check out the full results below! 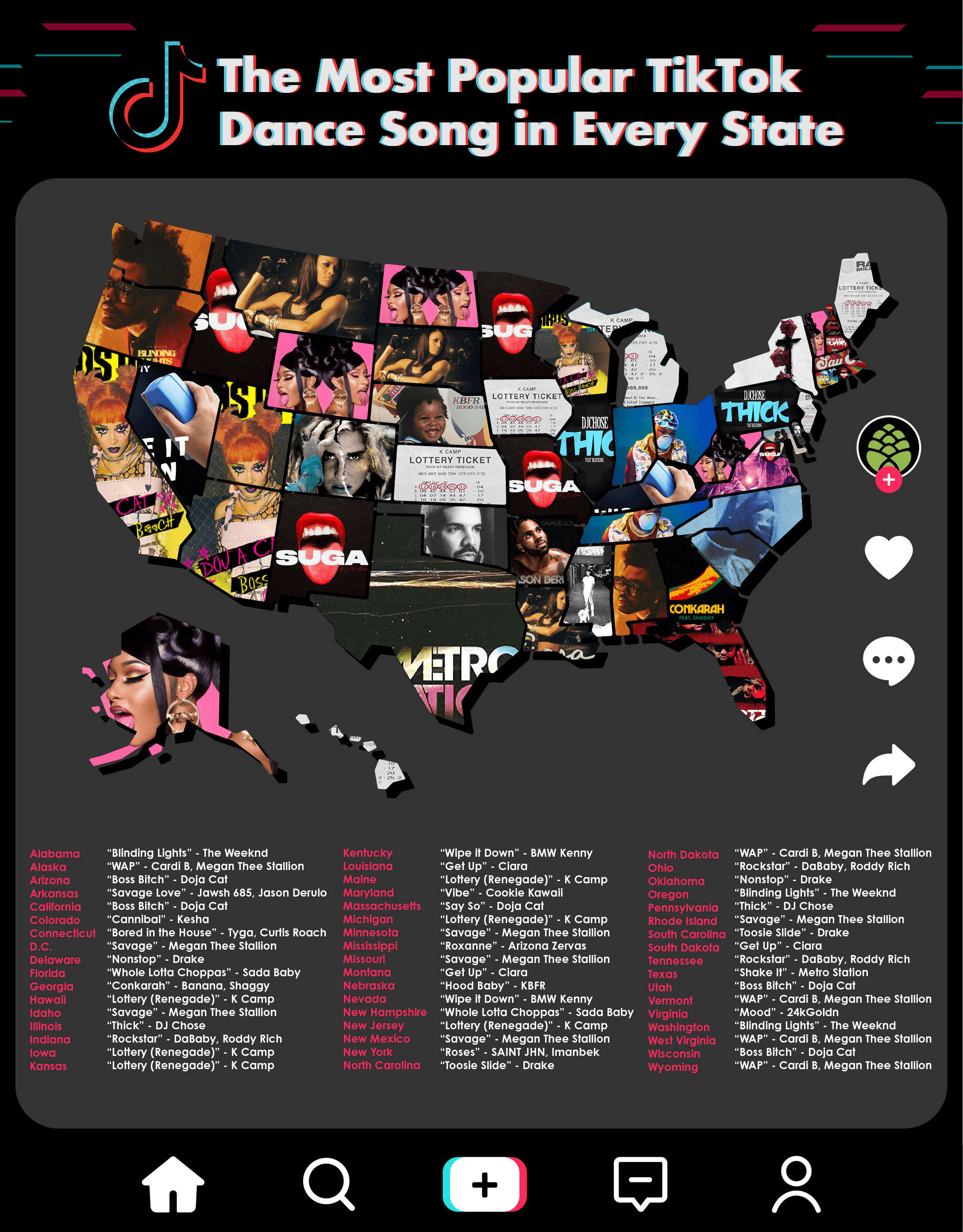 According to Google Trends, online interest in popular TikTok dances varied quite a bit, state by state. Favorite dance songs spanned everything from Savage by Megan Thee Stallion to Rockstar by DaBaby & Roddy Rich. And while the great thing about TikTok is that users all over the world can get noticed for their killer moves, it’s worth noting the most popular dances in the hub that many TikTokers call home: California.

In California, the most popular TikTok dance song was Boss Bitch, made by current chart-topper Doja Cat. The dance has taken on a movement of its own since being featured on the Birds of Prey soundtrack, being replicated by dancers aiming to pump themselves up to this upbeat track. What’s more, Doja Cat’s popularity on TikTok inspired her and singer Bebe Rexha to make a new, ready-for-TikTok song that features popular TikTokers Charli D’Amelio and Nikita Dragon. 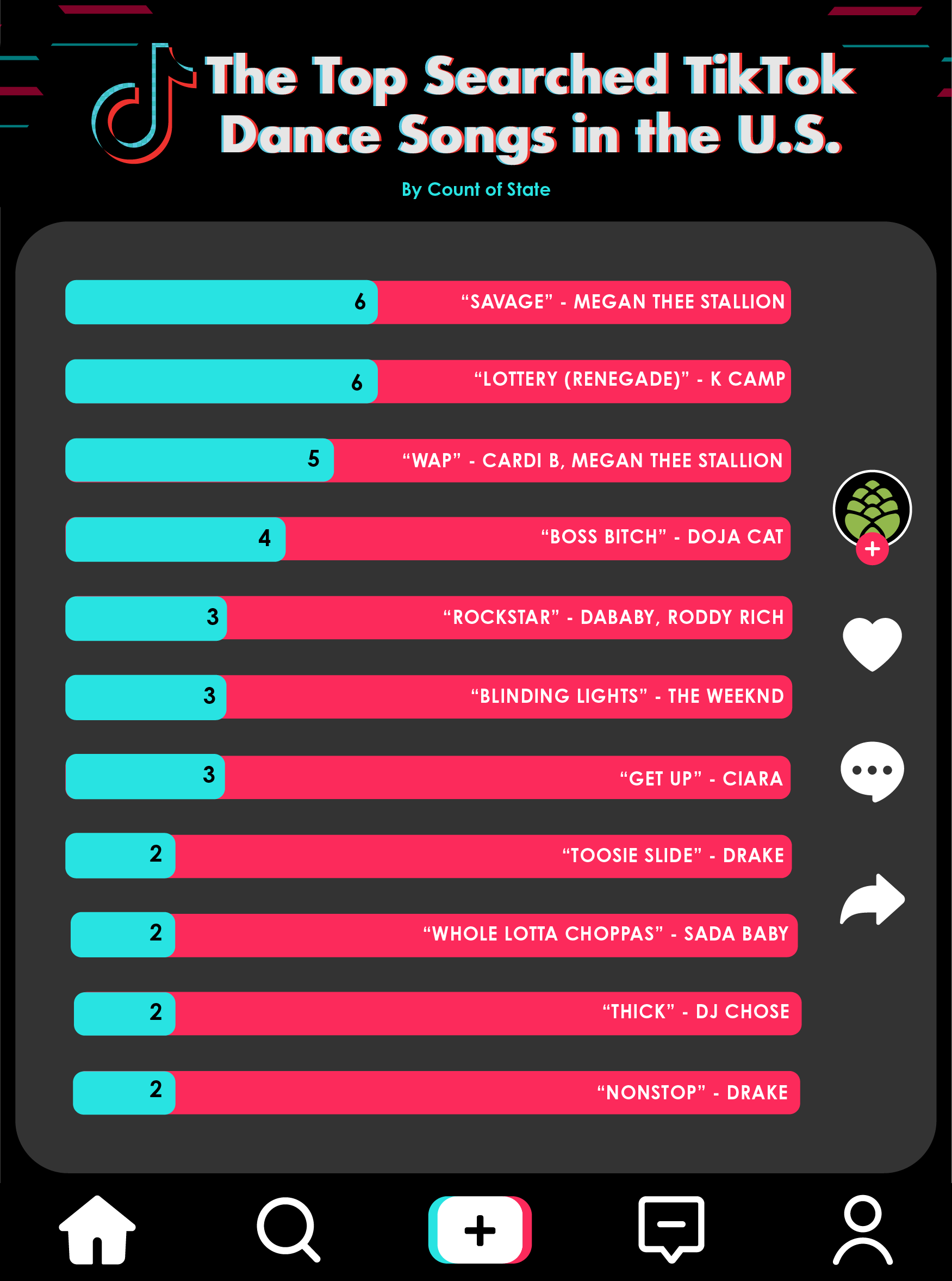 We also looked at the most popular TikTok dance songs overall and the winners were Savage by Megan Thee Stallion and Lottery (Renegade) by K Camp – both the top searched dance songs in six states. Thousands have participated in the TikTok challenges associated with these songs and tutorial videos where users can learn the dance moves step-by-step can be readily found on Youtube. In fact, after a remix was made by a TikTok fan featuring Beyonce vocals, the #savageremix hashtag went viral, with people of all ages learning the dance, as reported by BET.

According to Google Trends, other popular dance songs overall were WAP, Boss Bitch, Rockstar, and Blinding Lights – all winning the top searched dance song in three or more states. These dances have inspired everything from workout videos to discussions of women’s empowerment; so if anyone asks, you can say that your hours of nailing down TikTok dance choreography were time devoted to self-care and education. We’ll back you up.